SHORTLY AFTER THE SPANISH-AMERICAN WAR, James Stembridge left his East Coast home and went to Los Angeles to seek his fortune. Somewhere around 1913 he met up with Cecil B. DeMille and landed a job helping him make a war movie. Mr. DeMille wanted James to coach the actors on how to act like soldiers and emulate their habits. This led to some steady work and sometime between 1916 and 1920 they recognized the need to accumulate a stock of firearms that could be used as movie props. Thus was the beginning of the Stembridge gun arsenal.

Over the years, James continued looking for and purchasing guns of all make and style and he became the leading armorer for the movie industry. Even though they rented firearms to all the studios, Stembridge Gun Rental was housed in a secure warehouse on the Paramount lot until 1979. The backbone of the business was its manager Fritz Dickie, who reigned from 1927 until 1974.

On Dec. 7, 1941, with the attack on Pearl Harbor underway, there was an immediate shoring up of the coastal defenses. On that same day the commander of Ft. MacArthur in Los Angeles called Stembridge and told him that he didnt think there were enough firearms at the fort. Stembridge immediately sent over several hundred rifles and more than 50 Thompson sub-machine guns.

Amazingly, when the war was over, all of the weapons were returned. Can you imagine a government agency being that reliable today? Stembridges contacts with the War Dept. paid off because with demobilization came the disposal of thousands of military firearms and Stembridge acquired enough to stock a movie army at scrap-metal prices.

By the 1980s, Stembridge had more than 10,000 guns in their armory. Unfortunately, the settlement of a family estate forced the sale of 400 of their historic guns, those used by legendary actors. Publishing magnate Robert Petersen bought them for his personal collection. Now his estate is auctioning them as noted in the article preceding this one.

The Stembridge Gun Rental is still in business and is operated by Syd Stembridge, grand-nephew of the founder. But times have changed. Many studios are using model guns now that can fire blanks designed to give a cinematic flash. Providing customized blank cartridges has long been a big facet of Stembridges business.

Most of this information was provided to Firegeezer in a personal interview with Syd Stembridge.

* Received some new items from Corlett Zamora this evening, who is looking for information on her Father, Manuel Zamora. Here’s a card that had her fathers name mentioned. If you have any information about Manuel Zamora, please leave a comment below so we can be in touch! Thanks!!! 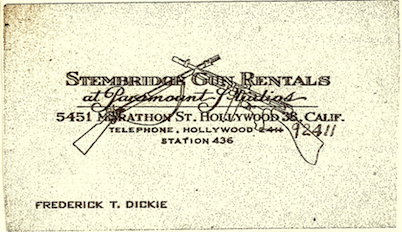 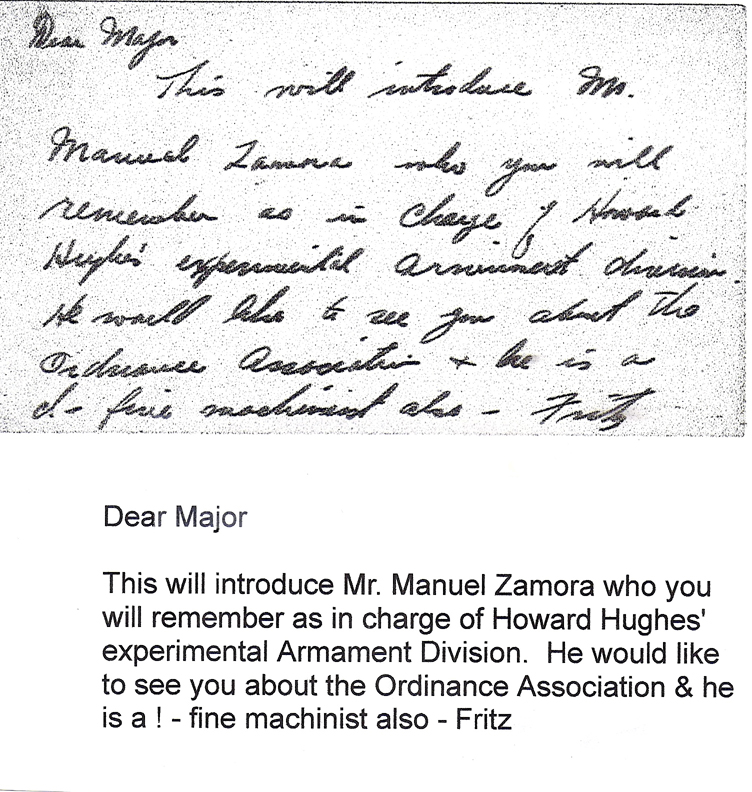 This entry was posted in history, Stembridge Gun Rentals. Bookmark the permalink.