Posted on February 26, 2017 by David Stembridge 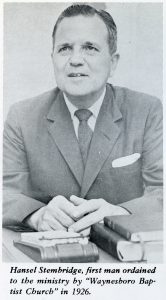 I’ve been researching some of the history of the Stembridges’ in Waynesboro, since I live in Waynesboro! One of the ones that I’ve read about was Henry Hansell Stembridge, Jr. He traces back on Thomas Baker Stembridge’s line, and that makes us (distant) cousins! Our common ancestor would have been William Stembridge born in 1792 in Baldwin County.

I have been in touch with Henry Hansell’s daughter Jane Stembridge who shared more details about her dad. She said that he grew up in Waynesboro. His dad, Henry Hansell Stembridge Sr , or Dr Stembridge as he was known, was a pharmacist in Waynesboro, and lived where the Pizza Hut is now located on 11th street. Henry Hansell Sr was a charter member of St. Michaels Episcopal Church. Henry Hansell Jr. was influenced by his uncle, Rev. Barney Foreman, of Beech Island, who was a Baptist Minister.

Young Stembridge is a member of this church and a student at Mercer University and at request from the Mount Zion Church at Junction City, Ga. where he is now serving as pastor, his ordination was granted.

He is a splendid young man, fine Christian character, and the good wishes and prayers of the family go with him in his high calling.”

Here’s a great article which told more about his heart and ministry, and what led him to San Fransisco:

“Charles Marsh: “Hudgins invoked the familiar claim that neither segregation nor integration have anything to do with the Gospel.”

Charles Marsh: Weeks later, Hudgins was visited by an old acquaintance and seminary classmate, H. Hansel Stembridge, Jr.  The two ministers had enjoyed theological discussions and social outings together during their student years at the Southern Baptist Theological Seminary, though they had not maintained strong ties since graduation in 1934.  Hudgins and Stembridge would exchange courtesies if they saw each other at the annual Southern Baptist Convention, but the dramatically different directions their ministries had taken made it difficult for the two to find common ground.

Stembridge had become increasingly drawn to a faith which fostered racial justice; his tenure at churches in Georgia, Tennessee, Kentucky, North Carolina and Virginia was always fragile, and sometimes shortened by his unwillingness to keep quiet on controversial issues.  In 1961, while pastor at the First Baptist Church of Lynchburg, Virginia, Stembridge welcomed into the Sunday morning service a group of black students from the local Lynchburg Seminary.  At the end of the service, church leaders complained to Stembridge about his decision.  They emphasized to him the congregation’s complete support of the church’s closed door policy:  blacks would not be allowed to enter the church.  After a week of soul-searching, Stembridge explained in a sermon the following Sunday that if a segregated church was what parishioners wanted, then he could no longer continue as their pastor.  Aside from the support of a local rabbi and priest–which only heightened evangelical resentment–Stembridge stood alone with his theological convictions.  The church leaders encouraged a speedy resignation.

The Lynchburg experience solidified Stembridge’s growing awareness that ministry in a mainline southern Baptist church was incompatible with his understanding of faith.  To be sure, the denomination counted among its members courageous clergymen like Clarence Jordon, T. B. Maston, Will D. Campbell, and Stembridge’s close friend, Carlyle Marney, but the difficulties of sustaining a pastorate in a traditional setting seemed to be insurmountable.  Although the Southern Baptist Convention had voiced support of Brown vs. Board in 1954, segregation continued to be widely accepted as God’s good design for humanity.  And in Lynchburg, segregation was preached with cavalier assurance by the town’s Protestant clergy, including the young Jerry Falwell whose newly-founded Thomas Road Baptist Church adhered to strict closed door policies.  (In these years, Falwell stated in no uncertain terms his opposition to any meddling of Christians in political matters:  “Nowhere are we commissioned to reform the externals.  We are not told to wage war against bootleggers, liquor stores, gamblers, murderers, prostitutes, racketeers, prejudiced persons, or institutions, or any other existing evil as such.”(1)

Stembridge and his wife took up residence in San Francisco.  There he attended classes at the Baptist Seminary in the Graduate Theological Union at Berkeley and began changing affiliations from the Southern Baptist Convention to the more liberal American Baptist Convention.  He continued to support civil rights causes, largely through his daughter Jane Stembridge, who had recently left her organizational post with SNCC in Atlanta to help develop a field office in Greenwood, Mississippi.  (In 1960, Jane had interrupted her own theological studies at Union Seminary in New York and come south.).  Stembridge admired his daughter’s commitments; he and his wife had always encouraged her to think about the social dimensions of faith.  But the parent’s fears for their daughter’s safety were difficult to bear.  With the klan killings of Schwerner, Chaney and Goodman and the national media coverage of intensified anti-civil rights violence, Stembridge decided to travel to Mississippi.  There he would spend time with his daughter and see first-hand the situation reported almost daily on television and in newspapers in the bay area.  He also would visit his old seminary classmate and encourage Hudgins to use his influence by preaching against violence and racism.

In July of 1964, with the financial support of a parishioner in his new congregation in Daly City, California, Stembridge flew to Mississippi on what he called a “tour of reconciliation.”(2) On the first day of his visit, Stembridge and his daughter drove northwest of Jackson to observe the ruins of a bombed black church–where still smoldering foundations were all that was left of the building.  The church was located in a settlement several miles off the main highway, reached only by a narrow dirt road that ended just beyond the church.  While Stembridge surveyed the tragedy–this was his first close-hand look at Klan terrorism–Jane talked to her father about the movement and about her hopes for the Summer Project.  She talked about the three missing civil rights workers.  “No one else should die down here.  Nobody should die anymore,” she wanted her father to know.(3)  But the sudden roaring of engines put a quick end to her reflections.  As several cars and pick-up trucks pulled into the church parking lot, a group of young white men, with their wives and children, proceeded to get out of their vehicles and walk toward the church.  Stembridge and his daughter headed directly to their rental car, locked the doors, and began driving cautiously towards the road, their eyes straight ahead, purposefully avoiding eye contact with any of the men.  The crowd stood their ground for one terrifying moment, but then moved slowly aside, allowing the minister and his daughter to drive back to the main highway and then on to Jackson.(4)

That night Stembridge and his daughter visited Douglas Hudgins and his wife.  They were served coffee in the Hudgins’ living room, and talked politely about seminary and denominational affairs.  Then in his gentle, almost naive way, Stembridge asked Hudgins the question (in the same kind of pained, brotherly manner he had asked a Birmingham minister after the klan bombing of a church had killed four black girls in their Sunday School class):  “How can it be, Doug, that you are here in this town preaching the Gospel and there’s all this hatred and violence?”(5) Hudgins was momentarily silent.  Then he said, “You simply don’t understand.  You know Baptists have no business tinkering in political matters”.(6) Hudgins invoked the familiar claim that neither segregation nor integration have anything to do with the Gospel.(7)

Stembridge came away from his meeting in despair, with the sad feeling that Hudgins was a man who “wanted to be blind.”(8)  But even more, it appeared to Stembridge that Hudgins had developed a “Messianic complex”; he had deceived himself with the arrogant belief that white Mississippians were the last to save the Southern Way of Life–“even to save America itself.”(9) Hudgins was unmoved by the visit.  He simply refused to see how Stembridge’s worries had anything to do with his responsibility as a preacher of the Gospel.  Stembridge concluded, “At least I ascertained who the Freedom Workers could depend upon and whom they couldn’t.”(10) His old seminary friend could not be counted among the former.”

This entry was posted in Civil Rights, Genealogy, history, information. Bookmark the permalink.